WhiteFeather Hunter is a Canadian artist/researcher, educator and arts administrator, as well as an independent consultant, curator and writer currently based in Montreal.

She positions her research-creation practice within the context of craft and bioart, via material investigations of the aesthetic and technological potential of bodily and vital materials. Her work, situated within and referencing the expanded textile field, has ranged widely.

WhiteFeather is a multiple-award winning scholar and arts grant recipient, holding an MFA in Fibres and Material Practices from Concordia University. She works as Principal Investigator and Technician for the Speculative Life BioLab at the Milieux Institute for Arts, Culture and Technology at Concordia University and actively presents her artworks in international exhibitions, festivals, artist talks and conferences. 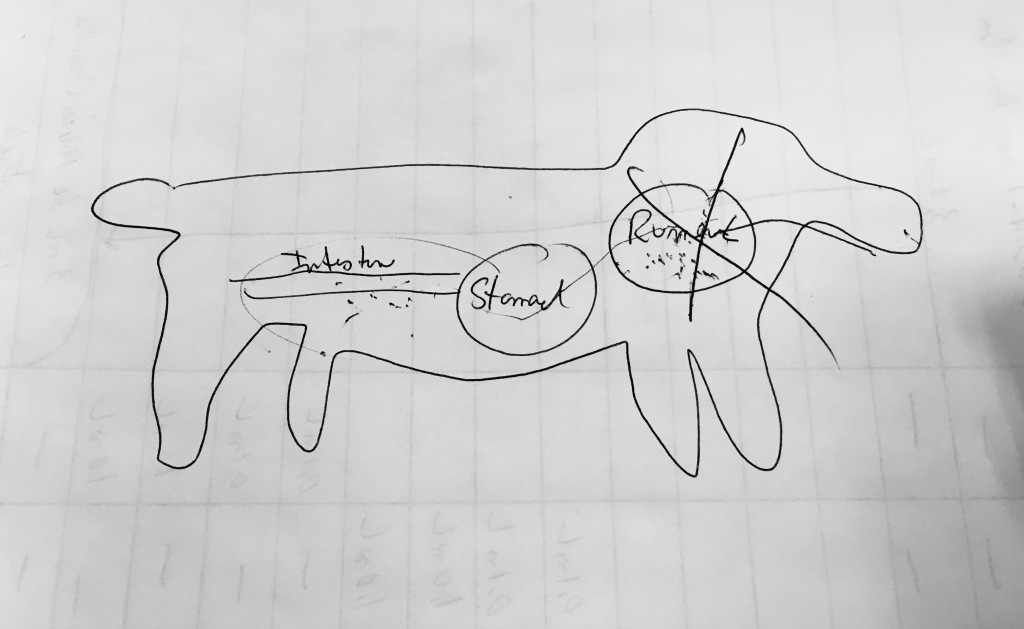 An illustration of the locations and functions of Bacteroides succinogenes, part of an explanation provided to me by Denis Groleau. This species of bacteria uses enzymatic interactions with ingested cellulosic materials (plantstuffs like grass, grain, etc) in the rumen to break it down and absorb the minerals and nutrients, which it delivers to the ruminant’s stomach to be absorbed. The bacteria itself, then, becomes the nourishment, traveling on through the stomach and intestinal system. This should provide us some more insight into the function of our own intestinal microbiomes.

The relationship between a bacterial membrane and a biocompatible substrate like cellulose, is one of nanometric intimacy. The outer encasing of a double-walled membrane (specific to Gram-negative bacteria) breaks away in patches in order to form vesicles which attach to the cellulose. While the cell membrane heals itself, the bacterial cell anchors into close contact with the substrate through the new vesicular grafts. These vesicle sites are where enzymes are released.

Those are technical specificities that Denis shared with me from his research (I’m learning new things already), but we also decided that a deeper consideration of the notion of intimacy, or what I’ll refer to as bactointimacy, is of mutual interest.

I met with Denis in his lab at the Université de Sherbrooke today for the first time.

Our discussion on bactointimacy began with Denis explaining to me a key component of the enzymatic intercommunication that he identified in his research: extreme proximity – direct membrane-to-membrane contact in the case of the vesicles. 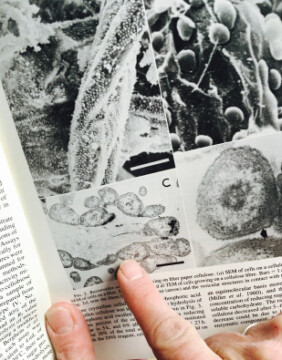 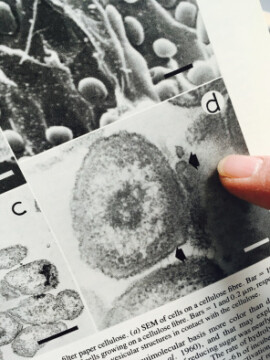 Denis is a scientist who is extremely passionate about the multitude of contributions of bacteria to our entire human existence and experience of life. He and I are closely aligned in our views on this, particularly for me with regards to my previously-stated views on cellular haptic intelligence/ epistemology (which I outline, starting here, in my published writing on mammalian cells and their “creative” interactions with my handwoven protein fibre scaffolds). Further to this, I asked Denis if he knew if it were possible for a cellulose-generating bacterium, such as Gluconacetobacter xylinus (the kind found in fermented tea) to co-exist with a cellulose-dissolving bacterium, such as his Bacteroides succinogenes. This was a question he couldn’t directly answer but was interested in further investigating. His five beautiful fermenters may be useful for that kind of experiment, though one bacteria is aerobic (G. xylinum) and one is anaerobic (B. succinogenes). It may be that their different requirements are compatible, though.

It is utterly delightful to share such a vivid curiosity about cellular communication and activity with Denis. His longstanding research on such matters is inspiring, and his philosophical openness is unique for a microbiologist.

It is this bactointimacy that will be one of the central topics for both of us, in terms of the kinds of outputs that result from my Sporobole residency and our collaboration. And so, our work has begun to shape itself beautifully already.

**** Endnote: the name of this faculty (Faculté de génie) really works for this witch-in-a-labcoat (moi): 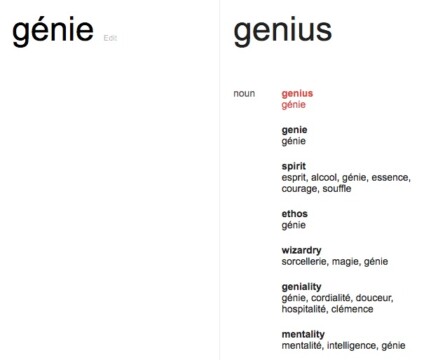