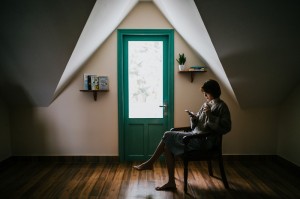 A great French publisher, who was praised for the effectiveness of publishing in discovering new authors, once said: “We will never know the names of the geniuses of literature who have not been published! ». This is also true for science: we will never know what could have been discovered that was not. Even if the effectiveness of science were a clear, smooth mirror of what it is, this mirror does not reflect all reality. 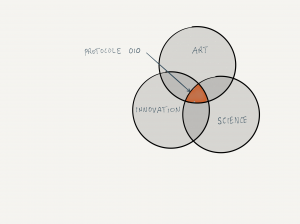 At the most basic level, there are three phases in the novelty production process. Each phase ends with a decisive moment:

An observation phase. This phase ends with the identification of a significant Observation. This is the first “O” in “OIO”.

An ideation phase. This phase ends with the formulation of a singular Idea. This is the “I” of “OIO”.

An implementation phase. This phase ends with the production of a new Object. This is the second “O” in “OIO”.

In the OIO protocol, “Purpose” means, in a very general way, what is achieved. Depending on the field in which the innovator operates the object thus takes many different forms: a prototype for an engineer, a brochure describing a service for a consultant, software for a computer scientist… In the case of an artist, the “Object” designates the work he will produce. In the case of a scientist, “Subject” refers to the article or book that the scientist will publish.

This analysis therefore suggests an innovation process in the form of a very simple linear, sequential scheme (Fig. 2). Of course, we must accept that the story is less simple than it seems. 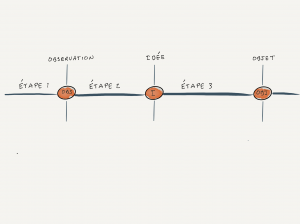 There is not a single observation in the first phase, for example. Similarly, there is not a single idea in the second phase. However, this does not call into question the principle of three successive stages punctuated by three decisive moments. But this makes the pattern much less linear (Fig. 3) 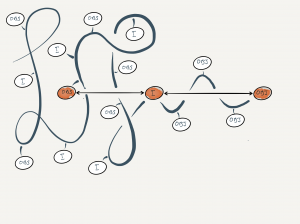 Of course, the OIO protocol is not the first attempt to describe the novelty production process[2]. A decisive advantage for him is that he embraces in the same movement of thought both the artistic process and the scientific process. Of course, there are differences between the two fields (on the type of observation, on the formulation of ideas, on the type of object produced), but these differences are within a common frame of reference.

But there is another difference that distinguishes it from other attempts to describe the process of novelty production: the role of the idea. This difference is important enough to be addressed.

We live in a culture where thinkers dominate. In our societies, the concept is king. This impacts all aspects of the way our societies function: from the hierarchy of professions to education. This bias is quite naturally found in innovation, where the role of the idea is overvalued. Thus creativity appears as the Alpha and Omega of the novelty production process. However, not only does the process of novelty production not begin with an idea, but it does not culminate with an idea. The idea is nothing without the observation that anchors it in the reality of the field. Nor is it anything without the work of materializing it in the form of an object. In contrast, the OIO protocol distinguishes three fundamentals of the innovation process observation, idea and purpose. These three fundamentals are of equal value, treatment and attention.

3 | How does our research fit into this theoretical framework?

Of course, we will focus on the three stages of the novelty production process the observation capture process the idea formulation process and the object realization process. But we won’t necessarily follow a temporal logic. In the same way, for each of these sub-topics, we will remain free of our editorial choices, according to meetings, discussions, current events. This work will remain essentially, irreducibly, a research work, that is to say a work open to astonishment, intuition and the unexpected. Here too the windows are open. We look forward to seeing you there.