Jean-Pierre Aubé is a Montreal artist. After studying photography at Concordia University, he completed a master’s degree in visual arts at UQAM. His interdisciplinary approach (sound performance, media art, installation, photography) borrows from scientific methods of data collection. He has participated in several exhibitions, performances and artistic events here and in fifteen countries: Rendre réel (Ottawa, 2007, Quebec Scene); Dataesthetics, Nova Gallery (Zagreb, Croatia, 2006); Electromagnetic Bodies (ZKM, Karlsrhue, Medialab-Prado Madrid, V2, Rotterdam). In Quebec, he has exhibited at the Musée National des beaux-arts du Québec and the Musée d’art contemporain de Montréal; he has also presented numerous performances, notably at Mutek and Elektra. In 2015, in addition to a solo exhibition at RadioArteMobile (Rome), Aubé was invited by the Galerie de l’UQAM and the Conseil des arts et des lettres du Québec to perform at the Venice Biennale. 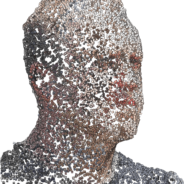 The film proposed by Jean-Pierre Aubé is the result of a one-year residency (2018-2019) – as part of Sporobole’s “Interface” program – at the Observatoire du Mont-Mégantic, the iREx and the ASTROlab of the Parc National du Mont-Mégantic. Du Mont-Mégantic aux exoplanètes is presented as a journey in three steps through all the seasons: we start as close as possible to nature, we follow the mountain path and then we are directed towards the telescope of the Observatory which already redirects us towards the sky and the stars, in the distance. From there, the tangible world shifts to that of data and algorithms. The film is a crossing and it carries within it an observation: by arranging passages from the micro to the macro, it brings to the forefront the space-time scales and their impact on our perception of the world.
The star to which the film goes back is called GU Psc. Scientists at iREx have discovered a planetary mass orbiting it: an exoplanet whose distance from its star is 2000 times the distance from the Earth to the sun, while the star itself is 1.45 million billion km from the Earth. From where we are, it is a tiny point in the universe, a star among many others. Yet this distance is what allows us to measure the extent of our vertigo.
On the borderline between documentary neutrality and scientific objectivity, Du Mont-Mégantic aux exoplanètes questions the mechanisms of the gaze as much as those, more obscure, of the increasingly complex instruments that allow us to collect masses of data. Monitored and analyzed, examined and processed, these data – with what they reveal and conceal at the same time – remind us that the universe constantly escapes us.