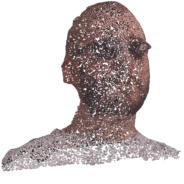 Generated from experimental virtual synthesizers – soon to be commercialized – Sometimes, Falling Through the ??? is a sonic performance that leaves no stone unturned in its level of unpredictability – one of the hallmarks of Osborne-Lanthier’s work. Musically, his compositions draw from such eclectic sources as grime, rap, noise, techno, ambient, contemporary classical, electronica, and heavy metal to create singular and strangely accessible sounds. Above all, Osborne-Lanthier works with intensity as if it were a tool for immersive engagement. His music is tactile and elastic, moving quickly from strange valleys of EDM tropes to vast expanses of heartfelt choral synths.
Created around the idea of “knowing/don’t knowing,” the piece presents itself as a mise en abyme of sonic events, which are revealed and concealed in turn – making sound as much X data as the initial equation can hold. And sometimes, even the first formula escapes us.